It does not look that long however the first version of the Linux VDA is already released almost six years ago. Citrix did work hard on the Linux VDA and added lots of functionality and enhancements in those six years. What I hear out of the field Linux VDAs are still a niche market, but the demand is growing especially in engineering companies. When you are a Windows guy (just like me) and start working with delivering Linux VDAs you will see there is still a (big) gap that (can) bring some challenges. In this article I will give my opinion where I see challenges with a Citrix Linux VDA.


As everybody know Citrix Virtual Apps and Desktops (CVAD) is a product that is there already for a really long time on Windows based Operating Systems and is completely build around Windows infrastructures and authentication principles. Therefore a VDI need to be part of an Active Directory (AD) domain as an computer account and the user need to be authenticated at Active Directory as well. Citrix needed also to port the Citrix policies in some way to the Linux operating system. If you deep dive into the integration of this part you will see that within a local database settings are based on the format of Windows registry.

Although this is not bad thing real Linux experts will definitely point you to this ‘strange’ way of working within a Linux operating system. Obviously this can cause some discussions with the Linux administrators, which can cause delays in the Proof of Concept and/or implementation phase.  At the end they will (need to) accept it and probably this is not the biggest challenge you will occur with Citrix Linux VDAs.

In the casus I encountered Linux VDAs CVAD is already in use for offering Windows based VDAs in all kind of variants. Those environments are in most case large enterprises, where in most cases an on-prem infrastructure is being used based on the LTSR edition (in most cased the 1912 version).

When running current Windows based operating systems this is working fine, but when running Linux this is not that logical anymore.

As an example I will use Red Hat Enterprise Linux (RHEL). If you take a look at the supported versions for the 1912 Linux VDA you will see that are supported are: version 6.1 and 7.7 (bot server as workstation). When we take a look at the support version in the CR version (for example CVAD 2012) we will see that the supported version from 1912 are not mentioned anymore, but now supports 7.8, 7.9, 8.1, 8.2 and 8.3 (again both workstation as server). This applies also to CentOS and Ubuntu operating systems.

In the case you have one Control Plane for Windows and Linux systems (which logically makes a lot of sense) you can image that this can lead to struggles. You would like to use LTSR, but for news version of Linux operating systems you need to use CR version. 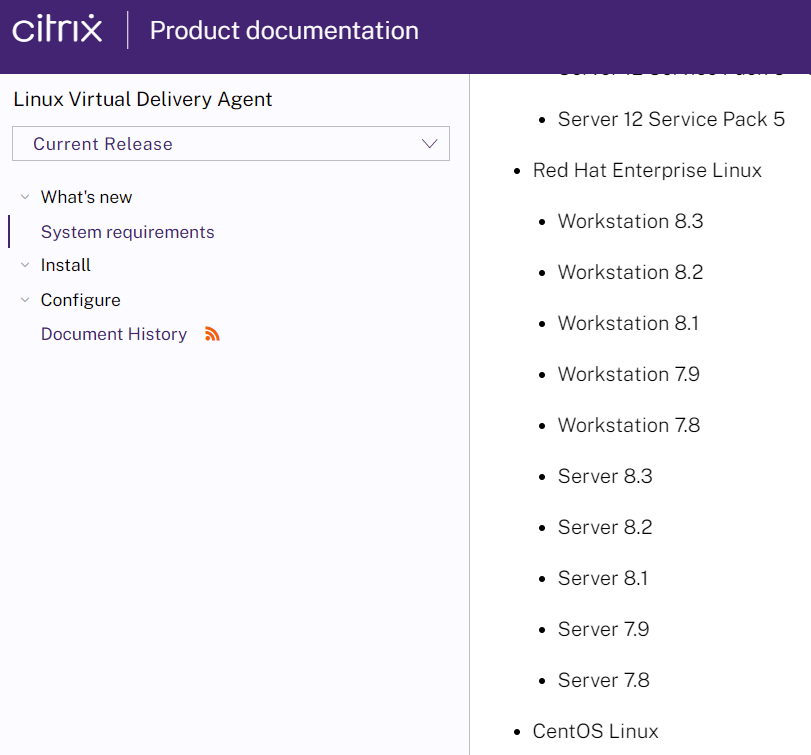 I have contacted Citrix about this and you are allowed to use newer CR versions with a LTRS Control Plane, however you will lose the additional support privileges which belong to the CR version. In other words if there issues you are kind of stuck. Personally I think the only solution is to move to CR release cycle if you really want to have decent support, but many IT organizations are not happy with that. An alternative would be moving to the CVAD service (in the cloud), but that is for several companies still one step to far.

The decision of Citrix to remove the support for Cloud Services as an hosting platform in the CR cycle makes the discussion even more difficult if the organization has some resources running in the cloud.

Nowadays almost every company expects recommendations and/or best practices from the vendor how to configure the product so it’s provides the best performance/efficiency. On a Windows level Citrix is providing a lot of detailed information for a long time. They even provides data for running the Windows operating system more efficient, providing the best performance. With the Citrix optimizer this even evaluated to a tool that configures the system for you. Not much to complain in my opinion.

However it is completely different story with Linux VDIs. You can search the whole internet, but there is nothing to find on Linux running with CVAD.

When I asked at Citrix if there are any best practices available and if so if those can be shared with me, the answer was pretty shocking. There are no best practices available to the support department, however Citrix consultancy has experiences with Linux VDIs. They can be contacted for consultancy services in which they will share best practices based on your infrastructure. I don’t know if anyone is aware of the pricing of Citrix Consultancy services, but I dare to see that they are not the cheapest in town (and then I say it very nicely). Are you to the one that will tell your

It is strange to see how much Citrix is providing for free for Windows operating system and there is nothing available for Linux. That you need to hire consultancy service for getting those best practices will not be well received by many companies.

Logically you do a check the current state before you are writing an article. The supporting topic was the first one that came up into mind based on my first Linux VDI project three years ago. The information in Director was really limited. Taking a look at the Director of 1912 several enhancements for VDI are made in those years. At first sight it looks like differences are not that big anymore. At the details the big difference is that no information is shown about the resources within the VM (vCPU, Memory, harddisk and disk statistics). Also the ICA RTT and ICA latency are not shown by default, you need to enable this for Linux with a Citrix policy. With the policies we touch the second thing that is not shown in the Director, the applied Citrix policies to a Linux VDI, with can be good starting point for some troubleshooting tasks. 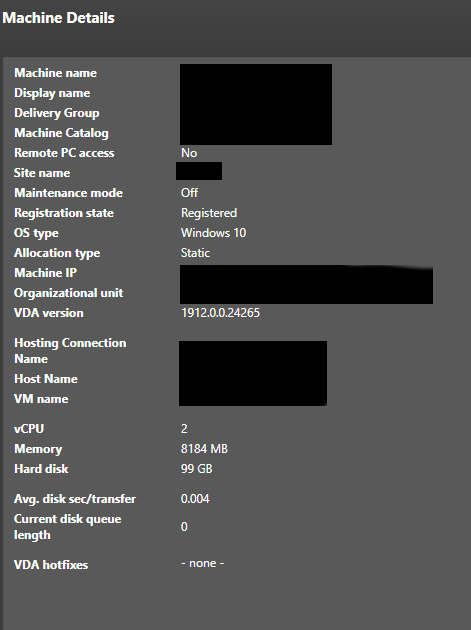 However if you scroll down to the features that were added later those are not available for Linus VDAs. You can think of logon duration, Session Start-up and HDX information. So it’s pity to see that new features in Director are still build for Windows only. Hopefully Citrix can get this up to par as quickly as possible.

Also Linux is still something special within Citrix support it selves, especially when the issue is something between one of the Control Plane components and the VDA. It that case multiple support teams are required for the case and then it becomes clear that the non-Linux VDA support groups don’t have (deep) knowledge of the working of the Linux VDA. Also the other way around is valid, the Linux support group does not have all insights how the Control Plane components work. This can lead to longer solving times and unclearness between the teams (and more important with the customer).

The last topic is around third party vendors. Those makes logically rational choices of  new features and supported operating systems. As the Linux VDI market is still relatively small (in comparison with Windows VDIs) there are not many products that have (full) support for Linux VDAs. If you do a research for monitor solutions you will find real specific Linux solutions which are lacking Citrix monitoring or the well-known Citrix monitoring solutions that are lacking Linux monitoring capabilities. There are just a few vendors that offer both, but it depends on the vendor how detailed the Linux support is. Luckily the vendors are getting more and more demand for Linux monitoring, so this feature is moving higher up to the back-logs. It does not make it easy for the vendors as Citrix is not supposing a lot of information on the VDAs, for example the virtual channels information is not available out of the Linux VDIs.

I know several vendors are actively working on getting better Linux VDI support in their product as I’m currently investigating this for a customer. Probably that will become another article specific about Linux VDI monitoring.

Citrix Linux VDIs are there now for almost six years and Citrix has made big steps in those six years. However there is still a (big) gap if you look at feature parity with Windows based VDIs. Also there are still specific challenges around Linux VDIs, which makes design decision more difficult (especially if you also have Windows based VDIs in your infrastructure within the same Citrix on-prem environment).