Citrix XenDesktop/XenApp 7.x LTSR or CR, which one to choose?

With the release of Citrix XenDesktop/XenApp (I will use XenDesktop for the further article) 7.6 FP3 Citrix introduced the Long Term Service Release (LTSR) and the Current Release (CR) lifecycles. Now we are sometime further it is good to take a look how this introduction involved and what should be considered for choosing one of the release cycles. In this article I will start describing what both releases actually means and provides the point that you should consider for choosing which release cycle for you organization.

For the ones that are not familiar with the two release cycles I will start quickly describing the characteristics of both release cycles.

The two big differences between the LTSR and the CR release is the supportability and enhancements to this version. The LTSR will be supported for up to 10 years by Citrix (5 years mainstream and 5 years of extended support), while the CR falls under the standard product lifecycle milestones. This standard lifecycle milestones is not defined clearly. In some of the articles something is mentioned about three years, however bugs are not fixed for a CR release in normal circumstances. This brings us to the big difference on supportability. If a bug is found in a CR release and it is not critical there will no hotfix be created for this. The bug will be fixed in the next CR release. So it can be that for a couple of months you will be annoyed by a functionality that is not functioning 100%. Till now I did not see big things that were shown in a CR release that impact the end user experience. For a LTSR a bug will be fixed in a Cumulative Update (CU) pack and you will get probably a private fix if the issue is critical.

On the other side there are enhancements within the product. A CR will also always include enhancements, this can be either improved or new functionality (or both of course). With the latest releases this was also functionality that was already available in the XenApp 6.5 release. Although we are with the 7.13 release almost on a comparable level there are still a few small gaps. But I expect that new functionality in the upcoming releases will be more really innovating components. Also we can (hopefully) expect integration of acquisition in the products like WEM (Workspace Environment Manager, formerly known as Norskale) and Unidesk. For a LTSR release no new enhancements will be added to a current version, you will receive only bugfixing for a current version. New enhancements will be added to new LTSR release.

This brings us to the release cycles of both releases. Citrix will release a CR every 3 to 9 months according to the article CTX205549 (which is a good reference article to read about the differences between the LTSR and CR). In practice we see that every 3 months (each quarter) a new version is released. So to keep fully up to date your company should have a streamlined update process which does not take longer than one or two months. Remember that is it not required to update each CR immediate. You can update 7.11 for example directly to 7.13. However if you can encounter an issue in an earlier release Citrix will ask you to upgrade to the latest version. For LTSR Citrix is mentioning that a new release will became available every 12 to 24 months. After the announcement the first LTSR version was released in October 2015. Citrix announced that a new LTSR will be become available in Q3 2017, so it looks like currently the 24 months cycle is what happens in practice currently.

If you only have subscription advantage the choice is pretty easy, you can only use the CR released. If you have software maintenance agreement you have a choice between both release cycles.

Citrix is pointing that LTSR is for larger organization which have a software update cycle of 3 till 5 years including a long and details process for updating software components. The CR release is advised for smaller companies that also would like to have the latest features in their environment.

When you do not need to have the latest and greatest enhancements (and actually many organization do not have those needs) LTSR would be good choice. You do not need to update the environment that frequently as a CR release, which many organization would like. However there is small caveat; Citrix is releasing CU (Cumulative Updates for the LTSR). According to the earlier referred article this is done between every 4 till 6 months and this is actually the case (CU1 was released May 2016, CU2 in October 2016 and CU3 in January 2017). 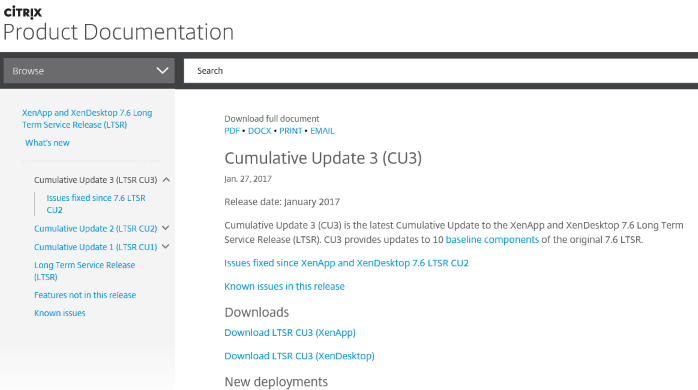 If you compare this with the CR release in the same time frame (CR 7.9 in May till 7.13 in February 2017) we are talking about 4 or 5 CR releases versus 3 CU updates for the LTSR. Actually this is not a big difference for the whole validation process as there is actually not a big difference in implementation and test time of a CR release or a CU update in my opinion. You could say that the risk of CU is (or should be) smaller than a CR release, however the test steps are probably the same (except if you want/need to test the new functionality in the CR release). With that in mind the decision is much tougher. Summarized the update process is a bit less frequently with a LTSR than a CR release, but this differs only 25% to 40%. Out of personal experiences I must see that the CR release updates are pretty painless. I updated my demo environment from 7.6 to 7.13 without any issues.

I have seen in large organization that the change process is more complicated for a new software version than an update based on the same version. So CU update has less steps and requirements than a CR release in the change process. In such a case the LTSR would be a good choice.

Choosing LTSR or CR really depends on the organization requirements, needs and change processes in place. With LTSR you will have a bit less updates in comparison with a CR, however by the Cumulative Update you will have at least a couple of updates per year as well. Currently good enhancements are made within the Current Releases that if you can fit it the CR in your lifecycle management I would advise to use the CR cycles at this moment. If your change process is long and exist of lot of steps and the enhancements are not required for your organization you could go for the LTSR version. I have both customers using the LTSR as the CR cycle. What I see is that the LTSR customers are struggling with the Cumulative Updates implementation, while the CR customers are regularly skipping a CR release when it does not provide added value for them.